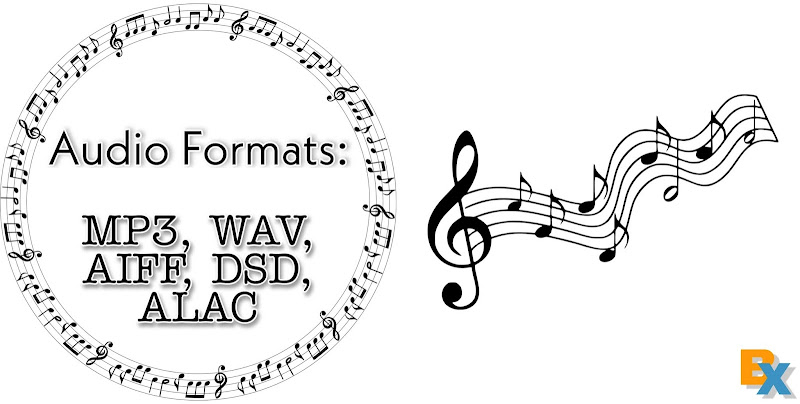 FLAC, WAV, AIFF, DSD… these are just some of the acronyms that you can find when looking for a digital format. They are also accompanied by technical data such as sample rates and bit depth. So many terms can leave you more off-balance than a chicken at a dance. And it is that unless you are an expert in digital sound, the process to choose the audio format that best suits your needs can be a mess. But if they explain it to you, the subject is relatively simple. That is why at Bestxpot we have prepared a complete guide on the different most-used audio formats 2022. This will prevent any acronym from taking you to the dark side.

What is Bit Depth and Sample Rate?

These two concepts are basic. To understand how audio formats work you need to know what Bit Depth and Sample Rate are. These are two measures that indicate the quality of a digital audio file. Let’s try to summarize it so that you stay with the general idea

When you read the specifications of the audio formats, you come across a couple of figures. For example: 32-bit / 192kHz or 24-bit / 96kHz. These numbers indicate the bit depth and the sample rate. These references tell us how much information the different formats transmit and the quality of the sound. For example, the audio we hear on a normal CD, or on a Spotify stream, is 16bit / 44.1kHz. Samples are always measured in Hertz (or hertz) and bit depth in Bits.

Software or hardware do not normally work with a continuous flow of information but they usually use chunks, samples, or samples to efficiently handle the data that is transmitted. The sample rate is the number of samples per second that are obtained from a recording. The greater the number of times a device plays the samples, the higher the sound quality. Each of these extracts or samples has a certain amount of information, which is the bit depth, or bit depth.

So that you understand it better, we are going to make a somewhat beastly analogy, which is not entirely true, but which will help you get the sense of all this. What is it that interests us? If you control a bit of photography and image, you will get it right away: the sample rate would be something similar to the frames or frames per second of a video, and the bit rate would be similar to the pixels of a photograph. The higher the number of the bit depth, the more information each sample will have. The more pixels an image has, the higher resolution each frame of a video will have. The more frames per second a movie have the higher definition. In short: the higher the Bit Depth number and the Sample Rate, the higher the quality of the audio file. Ear cooking?

What is the MP3 format?

If you’re interested in getting some audio fidelity and decent sound from your files, you’ll want to avoid this format. Why? Because basically, an MP3 is a file that sacrifices audio quality to minimize size. They weigh very little to be read by any device. The negative? Compressing these files provides a poor, almost lifeless sound. Today hardly anyone uses that format seriously. Even her creators recently ended the license by declaring her dead. But surely from time to time, you find a zombie file with this format.

What is the WAV format?

The WAV (Waveform Audio File Format) is equally common but best for anyone who wants a format decent audio. They are higher resolution files than MP3s. A WAV is a piece of audio that is encoded with something known as Pulse Code Modulation (PCM), a medium that encodes pieces of analog audio and converts them to digital so that they can have the Sample Rate and Bit Depth that we have already talked about previously.

What is the AIFF format?

The AIFF (Audio Interchange File Format) audio format is very similar to WAV, as it also uses PCM to encode analog audio pieces and present them in digital format. This format was born as Apple’s response to Microsoft’s WAV, and at first, it could only work on MAC computers. Currently, AIFF and WAV are more or less interchangeable.

To close this topic we will tell you that if you have a file in WAV or AIFF audio formats you will hear a good quality sound piece. Typically these formats are used in files that we play through our services, such as the iTunes Music Library. We won’t see them on online streaming services, which tend to use special file types. Now we will review that point.

Audio formats: OGG vs Opus vs FLAC vs ALAC

Today much of the music that is heard sounds through online platforms. It is worth talking about the audio formats used by services like Spotify, Tidal, or Apple Music.

What is the OGG format?

OGG audio formats are like supercharged MP3s. They are compressed audio files, which means that they have a size that allows transmission via WiFi, but at the same time, they avoid damage that is usually generated in the compression process. Spotify uses these OGG formats. Depending on how much you want to pay for this service, you can listen to them through this portal with different sample rates: from 96 kbps to Premium files of 320 kbps. The audio quality that Spotify provides for Premium users is quite good.

What is the Opus format?

Opus is a new codec that uses the Ogg container. It was developed by the creators of FLAC themselves, with the help of Mozilla and Skype. It can handle up to 510 kbps and 48 kHz. This new format stands out for its low latency, so it is ideal for online audio broadcasts. Its average latency of 22.5 ms is well below other codecs. It’s versatile, open, and more and more platforms are embracing it.

What is the FLAC format?

With FLAC audio codecs the sound quality increases compared to OGG. They are lossless, or lossless, audio formats that perform a great trick: they compress file sizes by up to 60% with hardly any loss of quality. In addition, they allow the transmission of sample rates of up to 1,411 kbps, which is significantly higher than any other audio format. This is the format used by the Tidal platform, the best high-quality audio streaming service.

What is the ALAC format?

Finally, we have the ALAC (Apple Lossless Audio Codec). This format is basically Apple’s alternative to FLAC. It is the format used by Itunes and for Apple Music broadcasts.

You can divide the aforementioned audio formats into two categories: those used to save audio files on hard drives ( MP3, WAV, AIFF ) and those used in online streaming services ( OGG, FLAC, ALAC ).

What is the DSD format?

Some time ago Sony and Philips started experimenting with very high-quality audio codecs – the DSD format was the result. DSD files are the best audio format in the world.

How does the DSD format work? A CD or Spotify streaming service has bit depth and sample rates of 16bit / 44.1kHZ. Instead, the DSD audio formats provide 1bit / 2.8224MHz. In other words: a DSD file samples a whopping 2,822,400 times per second, and each time it takes these samples it produces 1bit of information.

Having 16 bits of information would not make any difference in this audio codec. When the sample rate is as high as in DSD files there is no benefit in higher bit depth. This 2,882,400 times per second sampling produces incredible detail.

As if that were not enough 2.8225mHz is not the limit in DSD files. There are also DSD64 and DSD128, which refer to DSD files with an even higher number of sample rates. The highest that we know of is the DSD256 +, which is sampled at 12,288mHZçz. This is really over the top, and recordings in this format are rare.

After all this veneer, the only thing worth keeping is that the sound of DSD files is excellent. You can perceive the music as if you were in a room with the musicians, every detail of every note is great and as we have said before, it is the best audio format that exists.

How can we listen to the DSD?

These files are so special that in order to play them properly you have to invest in an external DAC, a headphone amplifier capable of handling the files, and a specialized digital player. We are not joking when we say they are special.

There are also some negatives: the most notable is that there are probably no DSD recordings to listen to all your favorite artists. If you are a fan of musicians such as Norah Jones or Carlos Santana, you will probably find a gem in DSD. But if you prefer Justin Bieber or more commercial artists, it is most likely that there is no recording available on DSD.

And even if you get the DSD recordings that you enjoy the most, you will have to pay for them. A DSD album has an approximate price of $25. They are also quite heavy: each album can take up to 12 GB of your hard drive. As we have said, if you invest so much in audio files you will want to avoid playing them with the integrated DAC of your computer or with the poor quality amplifiers that many headphones can bring. To really savor them we recommend investing in a quality external DAC and headphone amplifier to take advantage of the quality of these files. As you can see, they are files made for audiophiles or professionals in the sector.

One of the things that streaming services like Spotify or Tidal can’t do, and files saved to discs can provide true high-definition audio. This is a somewhat ambiguous term that relates to many things, but it basically means audio with the highest quality. A recent development, however, could bring these high-definition files to online broadcasts.

The novelty is called MQA (Master Quality Authenticated): these audio codecs provide enormous sound quality to fairly light files. They use sophisticated digital technology that allows them to be attached to a FLAC or WAV container so that they can be transmitted over a WiFi signal.

They are already available but are not yet popular with today’s mainstream audio formats. You can listen to MQA audio on Tidal, but you will need special hardware to be able to play it. Like DSDs, MQA files require some special internals in order to sound right.

We haven’t covered every audio format available on the planet in this article, but we do cover the most important ones. With this reading, you can easily distinguish between the different audio formats and make a decision about which one is the best for you. You can check out our article on how to prevent hearing loss or our in-depth reviews on the best gaming headphones, DACs, speakers, or any audio equipment you want to know more about.