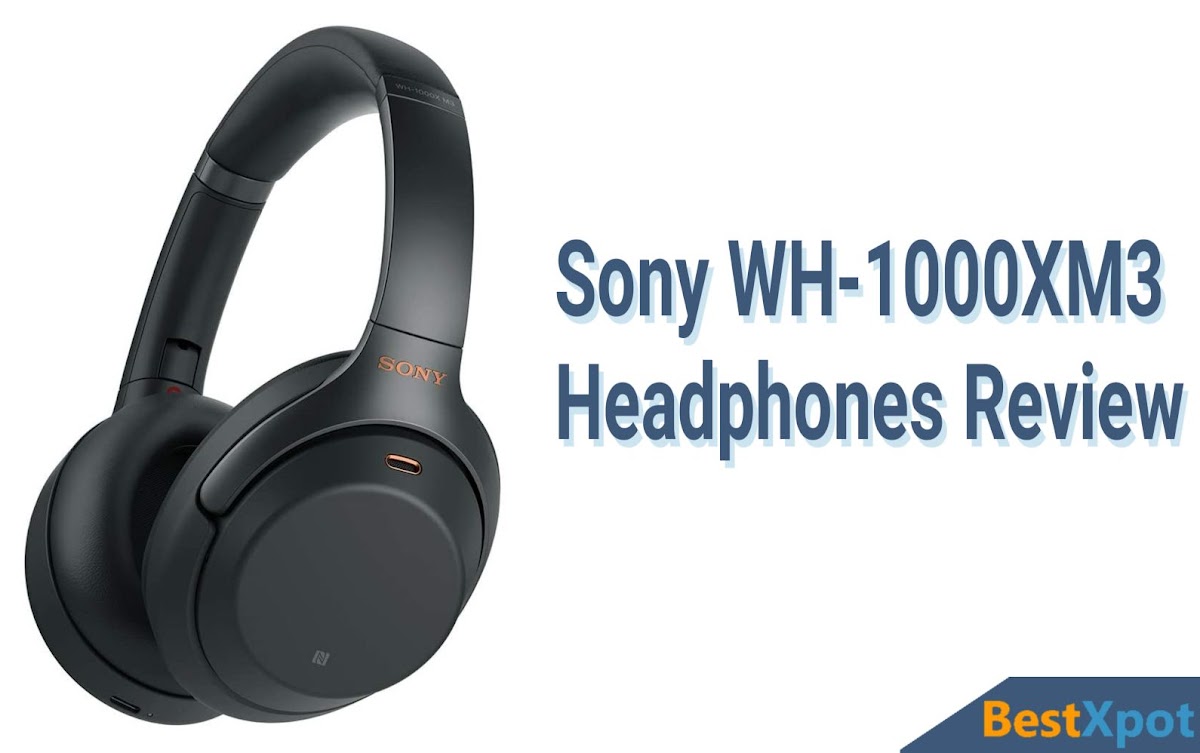 Not everyone and always may have enough passive capabilities of headphones to isolate you from ambient noise, for example, on an airplane or public transport. For these purposes, headphones with an active noise canceling system would be a good choice. This is exactly what Sony WH-1000XM3 headphones, the updated third-generation model from Sony WH-1000X, perfectly bring to us. But, it is also well updated than the previous version. In this article, we bring a complete Sony WH-1000XM3 headphones review that will help you to make the decision whether you will buy it or not.

They’re so good at isolating from the outside, it’s hard to believe the company has released noise-canceling headphones. It is the third generation of the WH-1000X Headphones Series, which first appeared in 2016 and with which the company stood up to Bose’s external noise isolation technology. The second generation, the WH-1000XM2, appeared a year later and served to underpin the quality of Sony’s noise-canceling technology.

The Japanese company has been working on the WH-1000XM3 since then and the results are really good. And this is the reason why we have fallen in love with it.

That Japanese excellence that has managed to agglutinate in the same music headphones audio that was already very good in itself, and has seasoned it with the best Noise Canceling technology that has been manufactured to date. If, in addition, we add several subtle design improvements over the previous model, such as more comfortable padding, a lighter construction, and a very similar price, the result is a zen symphony in the form of headphones that promise to be in the spotlight for a few how many years.

On the outside, the Sony WH-1000XM3 noise-canceling headphones are very similar to the Sony WH-1000XM2, although they have several positive differences: the main difference is that they weigh 20 grams less than the previous model (255g vs 275 g). This detail does not seem very significant but after a few hours of use, it shows. From our point of view, both for weight and comfort, they are close to the Bose QuietComfort 35 II (234g). However, they move away from the B&W PX, another of the best Bluetooth helmets.

The design remains minimalist and elegant, ideal for executives who need to travel a lot. They are available in silver and in a darker black than previous versions, with some minimal colored details, such as the Sony logo or the microphones for active noise cancellation technology. Another difference is that the Sony WH-1000XM3 comes in a new, more effective, and comfortable Over-Ear design than previous versions. The cups cover the ears better and the band leaves less empty space with respect to the head.

The Sony WH-1000XM3 headphones is one of the most comfortable headphones we’ve tested (only comparable to the Bose QC 35 II ) and you can give it intensive use without being disturbed. The construction material of the Sony WH-1000XM3 noise-canceling headphones is mainly plastic. Some users may prefer the aluminum details of the B&W PX or the leather of the Sennheiser Momentum Wireless, but these Sony helmets are very stylish.

Both the cups and the band are padded with soft-touch faux leather and the buttons are more solid compared to the previous model. One drawback is that they don’t have a textured finish, so they can show wear marks like scratches or fingerprints more easily – treat them with care. The purchase packaging includes a sturdy nylon bag with compartments for the cables, so you keep them safe and clean when traveling.

The Sony WH-1000XM3 only has two buttons, on the left cup: one controls the ignition and the Bluetooth connection, while the other allows you to choose three settings for noise cancellation technology (on, off, and ambient mode).

Below the button is the input for the audio cable and in the other cup, it presents a USB type C port to charge the headphones. The shopping package comes with a USB-C cable for charging, a user manual, a 3.5mm audio cable, and a hard carrying case.

The controls for playback are tactile and are located on a sensitive control pad located in the right cup. To fast-forward the song you just need to touch the cup with your finger and move it to the right; to go back, to the left. The pause works by tapping the cup twice, and the same to restart playback.

To increase or decrease the volume you just have to move your finger up or down. It is true that the system requires a little getting used to, but after using them several times you get used to it, as it is quite intuitive. In the lower part of the left cup, they have an NFC chip for fast wireless connection and use Bluetooth 4.2 technology.

As far as features and extras are concerned, the Sony WH-1000XM3 is the most complete noise-canceling headphones on the market. It integrates a new chip called the HD Noise Canceling Processor QN1 that far exceeds the performance of the XM2. Besides, most noise-canceling headphones are designed to attenuate low frequencies – such as engine sounds – but the QN1 chip also largely eliminates mid-and high-frequency noises. The QN1 chip in the Sony WH-1000XM3 headphones also improves sound quality.

It can handle 32-bit signals and includes a DAC and an analog amplifier. This results in a higher signal-to-noise ratio and less distortion. These noise-canceling Sony headphones can get the most out of playing high-resolution formats. Another of the new features presented by the Sony WH-1000XM3 helmets with respect to the previous model is that they integrate three extra microphones in the left cup designed to capture your voice (during calls). These are separate from the mics that are used for noise cancellation.

The Sony WH-1000XM3 also integrates the Atmospheric Pressure Optimiser function, ideal for those who regularly travel on airplanes. This function adjusts the frequency response and sensitivity of the microphones for better performance at heights.

The Sony WH-1000XM3 headphones offer really excellent noise cancellation technology. According to the company, they have achieved four times better performance than the noise cancellation of the XM2, headsets that already stood out in the market. Until recently, the Bose QuietComfort were the best on the market, but the improvements of these Sony helmets position them as the most TOP next to the new Bose 700 headphones.

The new QN1 chip improves noise cancellation considerably over the XM2, especially in the mid and high frequencies.

The older model is very good and perfectly cancels out low-frequency ambient noises, but the XM3s attenuate external voices much better. We have tested them in various settings: in the newsroom, during a convention, on the street and we have loved them, we went as strangers to the world. We couldn’t hear any outside conversation or engine sounds.

The best noise-canceling headphones tend to have trouble with wind noises, but the Sony WH-1000XM3 hardly limped in this area. Noise cancellation is set to maximum at the factory, but you can change it with the Sony Headphones Connect App. In addition, the Sony WH-1000XM3 works with the motion sensors of your mobile phone and can offer different levels of noise cancellation depending on the activity you are doing: sitting, walking, running, etc.

When walking you can adjust the noise cancellation to 50% to be aware of what is happening around you, while the maximum level is perfect for when you travel by train or subway, which are louder environments. The Sony WH-1000XM3 headphones also have a feature called Personal NC Optimizer that analyzes the shape of your head and detects if you are wearing glasses or have long hair to optimize noise cancellation.

Another very useful function is the Quick Attention mode. If you keep your hand on the control pad, the volume of your music is automatically lowered to better hear external sounds. This comes in handy if you need to keep an eye on the public address when waiting for a train or plane.

If the audio quality offered by the XM2 headphones was already great, the Sony WH-1000XM3 is better. This is largely due to the addition of an analog amplifier that produces a firmer and clearer sound at all frequencies. Instruments and vocals feel richer and more defined, while the bass is stronger but more controlled. Its performance is really great when playing all genres of music.

They also emit a more spacious and open sound. Instruments breathe better and separation is noticeable between all tones. The Sony WH-1000XM3 headphones support the aptX low-latency codec that allows you to stream high-definition formations wirelessly. They sound better if you use them with an Android phone or MP3 player that supports this codec, but it do not detract when used with iPhones or any device that does not support aptX.

The mids have a good presence, the highs feel very clear and the lows are deep and have a good weight. When paired with an Android phone and the Headphones Connect app, you can choose to prioritize the sound quality or the stability of the Bluetooth connection. Sound priority sends music in LDAC format to the headphones, while connection stability mode sends it in AAC, which offers less detail, dynamism, and sonic spatiality. Unless you are in an area with a lot of interference, we recommend that you always choose the option that gives priority to sound quality. When testing them we did not have any problems with the connection in this model.

The Sony WH-1000XM3 introduces a new charging system: the micro-USB port has also been replaced with a USB Type-C port, compatible with most of the latest Android phones. The fast-charging system has also improved a lot compared to the XM2. With only ten minutes of charge, you can use them for more than five hours (70 minutes in the previous model) and a full charge takes approximately three hours (4 hours in the XM2).

The battery provides up to 30 hours of continuous playback in wireless mode and with noise cancellation activated, a performance unknown in other models to date. In addition, the automatic power-off function, designed to save battery life when no audio signals are detected, can be adjusted via the Connect app for Sony headphones. Those who don’t want to cancel out external noise can keep this feature off, but it comes in handy for napping on an airplane, for example.

After testing the Sony WH-1000XM3 headphones we had a crush. We can’t really find a negative point about them. Their sound quality is very good, they are comfortable, they integrate a high-performance battery and in terms of functionality options and extras, they are one step ahead of the competition.

The Bose QuietComfort 35 II, was considered the best headphones in terms of active noise cancellation technology, but the improvements that the Sony WH-1000XM3 has placed them the new king of this category. Interested? Get the best price on Amazon.

We leave you with the official video about the Sony WH-1000XM3.

I hope this review helped you to know the pros and cons and detailed information of Sony WH-1000XM3 Headphones that might help you to make a buying decision.